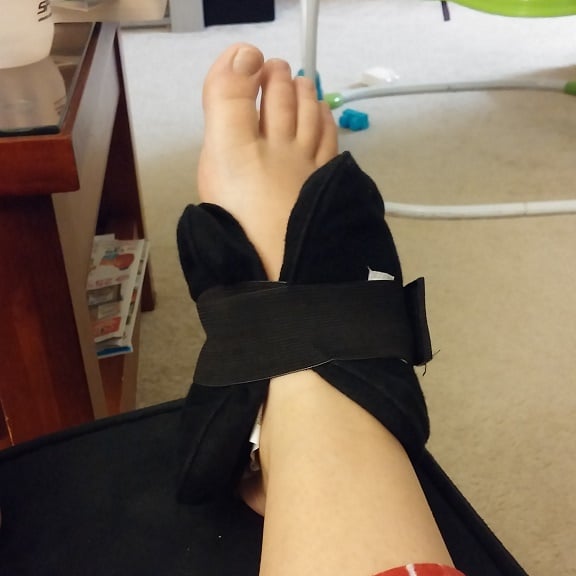 Ouch.  I sprained the outside of my foot when I rolled it on a divet in the ground in an outdoor bootcamp.  It was silly and my fault for not taking a closer look at where I was standing before leading a round of high knees, but no use crying over an already rolled foot.   Ironically my ankle is completely fine despite the roll; it was just the outside of the foot that got messed up.  I got home, iced it (love these types of wrappable ice packs), and took two weeks off of any intense exercise.

This past Saturday was my first day out running on it in two weeks, and I was curious to see how it would hold up.  My hubby works over at Anna Maria College in Massachusetts and they were holding the Anna Maria 5K for their homecoming weekend.  The race was to raise money for scholarships, so it was a perfect excuse to get out there and run for fun.  {It was also actually my first time visiting the campus over there, which is super cute.}

Terry was also planning to run.  He was really disappointed when we both went to head out the door and realized we were #twinning in our similar fluorescent yellow shirts and black bottoms. 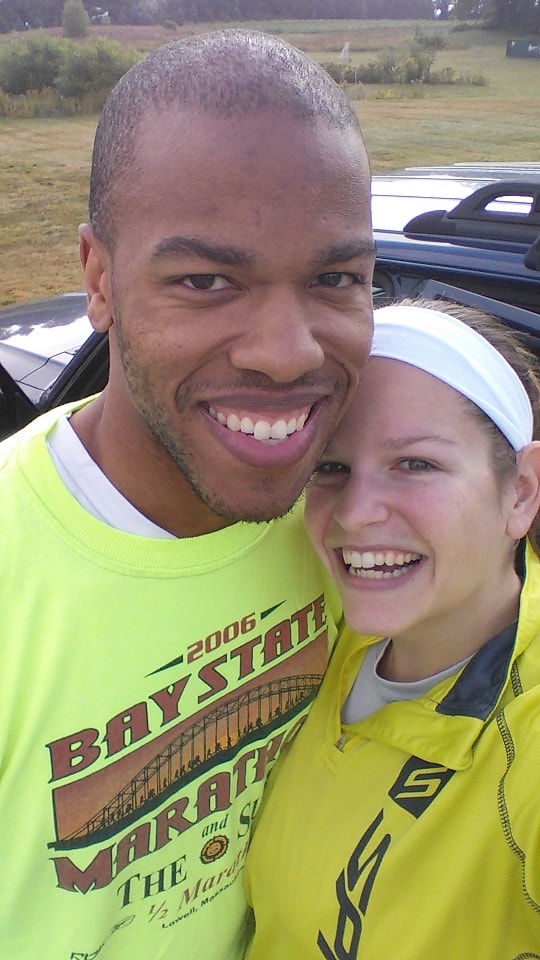 I tried to get a photo to show both of our whole outfits, but it turned into a ridiculous picture where Terry’s head looks 4x bigger than mine because he’s so much taller. 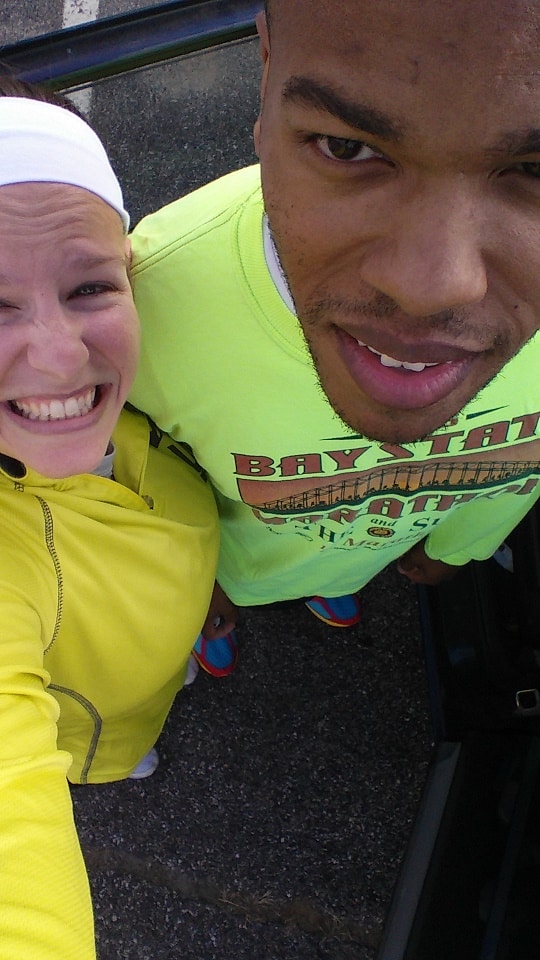 Terry decided he would take Devon in the jogging stroller (way ahead of me, haha), while I ran solo.  Devon loves that stroller.  I’m so glad I grabbed it up when I spotted it at clearance at Target two months ago.  He is so entertained looking at people while we’re out on runs.

This 5K was a small race – the smallest I’ve ever been in, maybe 25 or 30 people.  That can be a high or low point for a racer.  For my hubby, who is somewhat fast, a small field means a better chance of placing closer to the front.  For me, a slow poke, a small field means I’m at the back of the pack risking losing my way, haha.  But it’s also nice not to have a crowded field and feel too much competitive pressure, so there are pros for me too.

I was most definitely at the back of the pack (last runner; there were a few walkers behind me), but luckily there was great signage on the course so it was easy to figure out where to go.  Of course, if I was lost, I could have easily figured out where to go by asking the patrolling police cars one of the 3 times they stopped to ask if I was okay.  It was actually kind of sweet because the guy kept saying “awesome, you’re doing great!”

I honestly thought I must have been running insanely slow given the frequent police interaction and the fact that I couldn’t see anyone else on the course, but I actually ended up finishing the race in under 36 minutes.  I want to say my time was 35:36, but it might have been 35:46 – I’m not 100% sure.  Either way, it’s a pretty darn good 5K for me (my all-time PR is 33 and change) and definitely the fastest I’ve run since Devon was born.

Terry did awesome too, coming in around 25 minutes while pushing a jogging stroller on a quite hilly course.

My foot felt fine while running, which I was really happy about.  It’s been a little sore today, but nothing too concerning.  I’m hoping it’s back to 100% again within the next week or two.

It was a fun race and I’m glad we got out there as a family on Saturday!

Share with me:  Do you prefer small races or big races?  Have you ever been the last runner or walker in a race?