Can beta alanine help triathletes?  Find out what it is, how it works in the body, and whether it can improve performance in your next triathlon.

Disclosure:  This post about beta alanine and triathlon is sponsored by NOW Foods.  As always, all opinions are my own.

When it comes to supplements, I’ve always been fairly picky.  I’m not convinced every pill and powder out there is worth it – I like to see at least a few examples of evidence-based research to support effectiveness and safety.  One example that triathletes might find worthwhile to check out, though?  Beta alanine.

I’m going to break down the science for you today…

{Disclaimer:  I am not a medical doctor.  Even though I am a Registered Dietitian, this post is not to be construed as medical advice.  This is for informational purposes only.  None of these statements have been evaluated by the FDA.}

What is beta alanine?

Beta alanine is an amino acid that is produced in the body, and we also get it by eating foods (particularly meat).  It’s used – along with another amino acid called l-histidine – to create carnosine in your muscles (1).*

Carnosine isn’t involved in building muscle, but rather helps your muscles in other ways, some of which are related to exercise.

The catch is that the total amount of carnosine your muscles can make is limited by your body’s beta alanine levels.  Less beta alanine = less carnosine.

Why not just supplement with carnosine?

It’s thought that carnosine is broken down by an enzyme before it would have a chance to reach the skeletal muscle.  Taking beta-alanine alone is postulated to be a more effective way to increase this intra-muscular carnosine.* 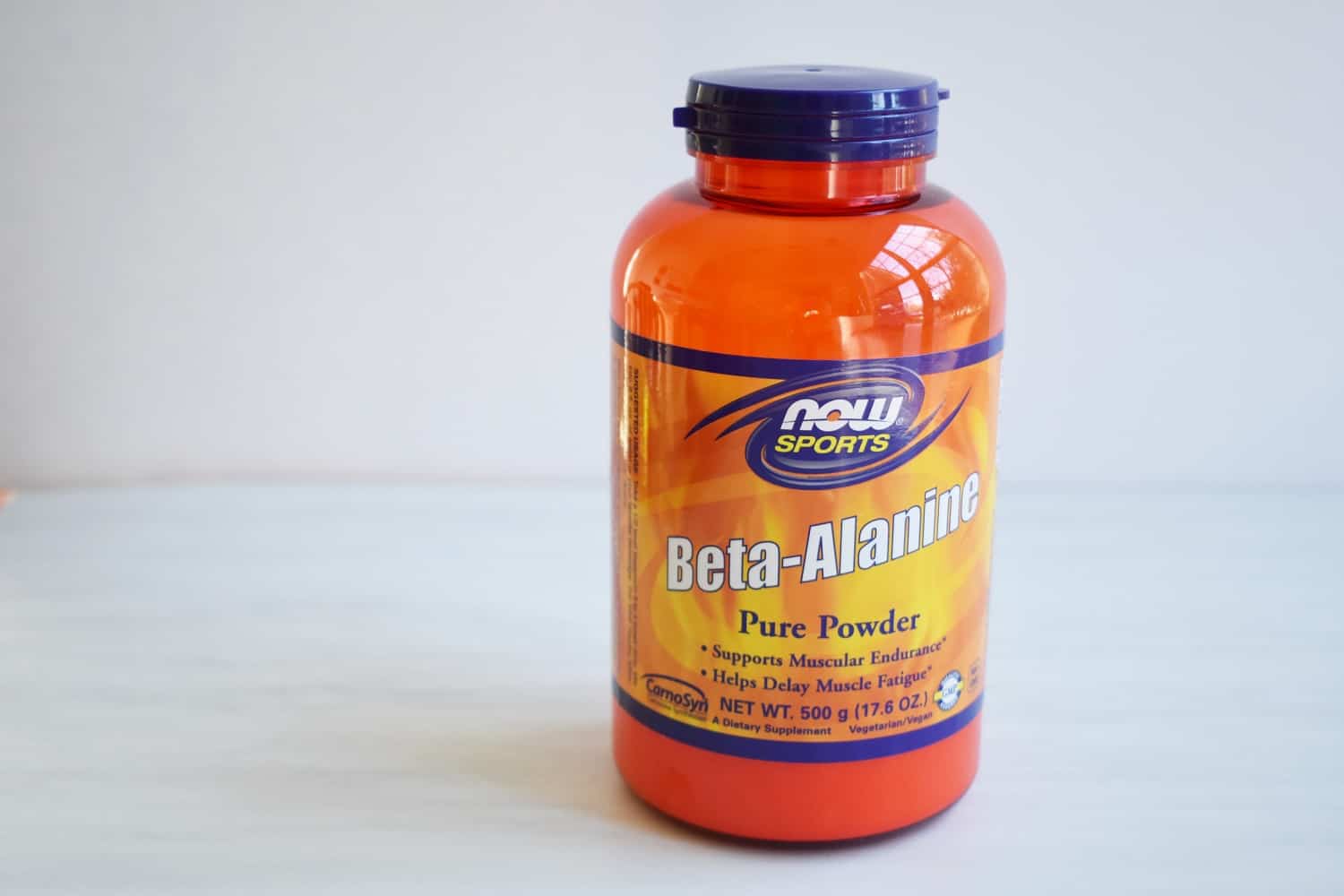 How does carnosine help with exercise?

Most research is on its role in buffering acids.  When you’re working out, there will be a certain intensity where the body starts producing lactic acid at an increasing rate.  The muscles find it tougher to contract when this acid is accumulating.  Your body has a hard time “keeping up” with addressing that lactic acid, and you start to see an upward trend in the blood levels.  (This is known as the lactate threshold in exercise science.)

It’s also thought that carnosine may help in other ways.  While exercising, your body produces additional reactive oxygen species (ROS), a type of free radical.  These may be involved in muscle soreness or fatigue, though the research is still in it’s infancy.  Carnosine can act as a scavenger to help address these free radicals and reduce potential damage they can cause to cells. (2).

Has this actually been shown to help with exercise capacity?

Yes – to a degree.  A 2012 meta-analysis found that beta alanine supplementation improved exercise capacity in tasks lasting 1 to 4 minutes.*  There were also benefits, though less pronounced, in exercise scenarios over 4 minutes.  This particular meta-analysis suggested no consistent benefits for exercises lasting less than 60 seconds.

There is additional research needed on endurance exercise lasting over 25 minutes.

What about specifically for swimming, biking, and running?

The data for running and swimming are not nearly as strong as the data for cycling.

For swimming, there are very few studies.  One study found that beta alanine supplementation for several weeks improved 100-m and 200-m swim performance. (4).*  However, another study found no difference in swim performance among elite athletes after 10 weeks. (5).   There were a few other pieces of research out there but most were on water polo players, not lap swimmers.

But cycling is where it gets interesting.  This is where a lot of the research has been done, and most has been rather positive.

Here are highlights from some recent cycling studies…

Of course, not every study found beneficial results.  A study looking at 1 hour time trial performance found no effect of beta alanine supplementation.  Similarly, there was no improvement in VO2 max in another study.  (15, 16).  These are not super surprising to me, though, since the benefit seems to lie more in anaerobic intervals rather than longer aerobic activity.

So will this actually help a triathlete?

My wishy-washy answer:  we don’t know for sure.  But where I see beta alanine playing a role is in boosting output in the carefully calculated speed work that is done.*  The research is strongest for the bike, it could possibly benefit swimming and running intervals too.*

It’s probably not going to help you on your long steady state triathlon training sessions.  But by providing a modest benefit to your speedwork, it may mean training harder during those particular sessions.* That means more effective overall training and possibly better outcomes on race day (thought certainly we’re talking a small effect).*

The benefits are probably strongest for a sprint distance athlete, and least important for a long course Ironman athlete.*  And it’s probably most relevant for a competitive athlete – rather than a recreational one just out there to have fun.*

How much beta alanine do you need to take to increase carnosine levels?

Research has typically looked at dosages of 4-6 grams per day of beta alanine, and found that these dosages increased muscle carnosine concentration.* The specific results are individualized, with studies finding anywhere from a 15% to an 80% increase, according to a position stand from the International Society of Sports Nutrition. (17).*

When should you take beta alanine?  Does it need to be in a pre-workout?

Beta alanine is not a time-dependent supplement.  You don’t have to take it as a “pre-workout”.  You can take it in divided doses throughout the day for four weeks (or more) to achieve the potential benefits.

Are there any side effects to beta alanine supplementation?

The most common side effect to using beta alanine is a tingling, or pins and needles, sensation.  This is more common with large doses at once.  The sensation is considered harmless, however it can be a bit annoying.  The risk of this side effect can be minimized by taking divided doses of 2 grams or less multiple times per day.  It also will typically fade with time. 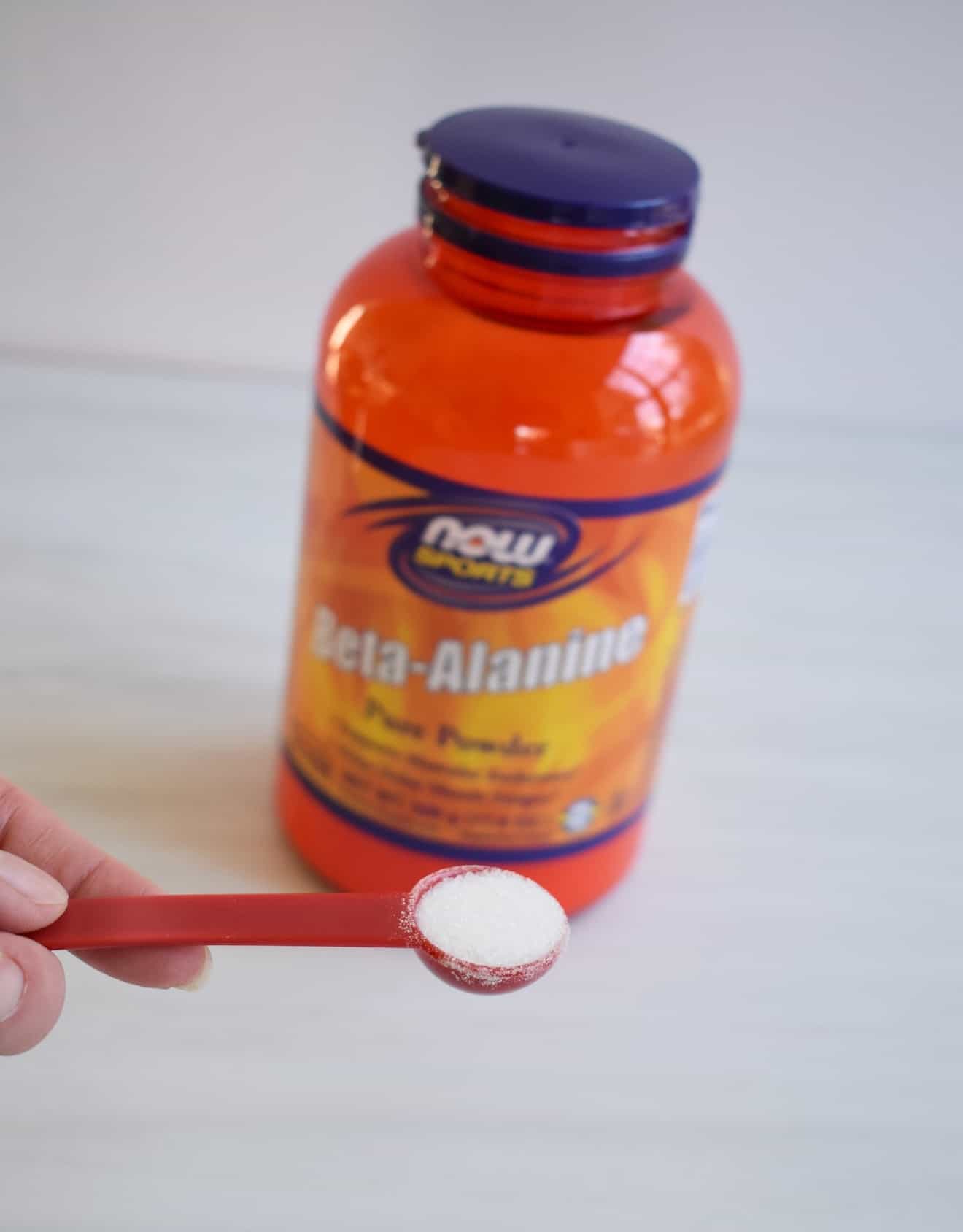 What kind of beta alanine should a triathlete try?

There are plenty of options on the market to meet your needs if you decide to try beta alanine.  I would personally choose NOW Foods Beta-Alanine pure powder.  I love the company and their values.  I also have toured their facility and appreciate the testing for purity and contamination in their labs (which is an issue I tend to have with some other supplement companies).  I also like that the beta alanine powder can be easily mixed into your drinks/smoothies.

There you have it – everything you need to know about beta alanine when it comes to triathlon training!

*These statements have not been evaluated by the Food and Drug Administration.  This product is not intended to diagnose, treat, cure or prevent any disease.