Disclosure:  This post is sponsored; I was a race ambassador for the Brittany Fund 5K/10K.

You may have noticed a lack of race recaps on the blog in the last few months – it’s been a while since I’ve raced!  In fact, I think my last road race was in the fall, so I was looking forward to the Brittany Fund 5K this past weekend to kick off my season.  This event is for a great cause, with proceeds used to support victims of traumatic injury.

We loaded up the jogging stroller into the car Saturday morning and headed out to Devens, MA for the race.  Two things I loved about this:  1) it was a Saturday race and 2) 10am start time.  I really like Saturday races because it means you start the weekend on an awesome note.  And 10am starts are nice for shorter races since you can get out of bed at a normal time and head on over. 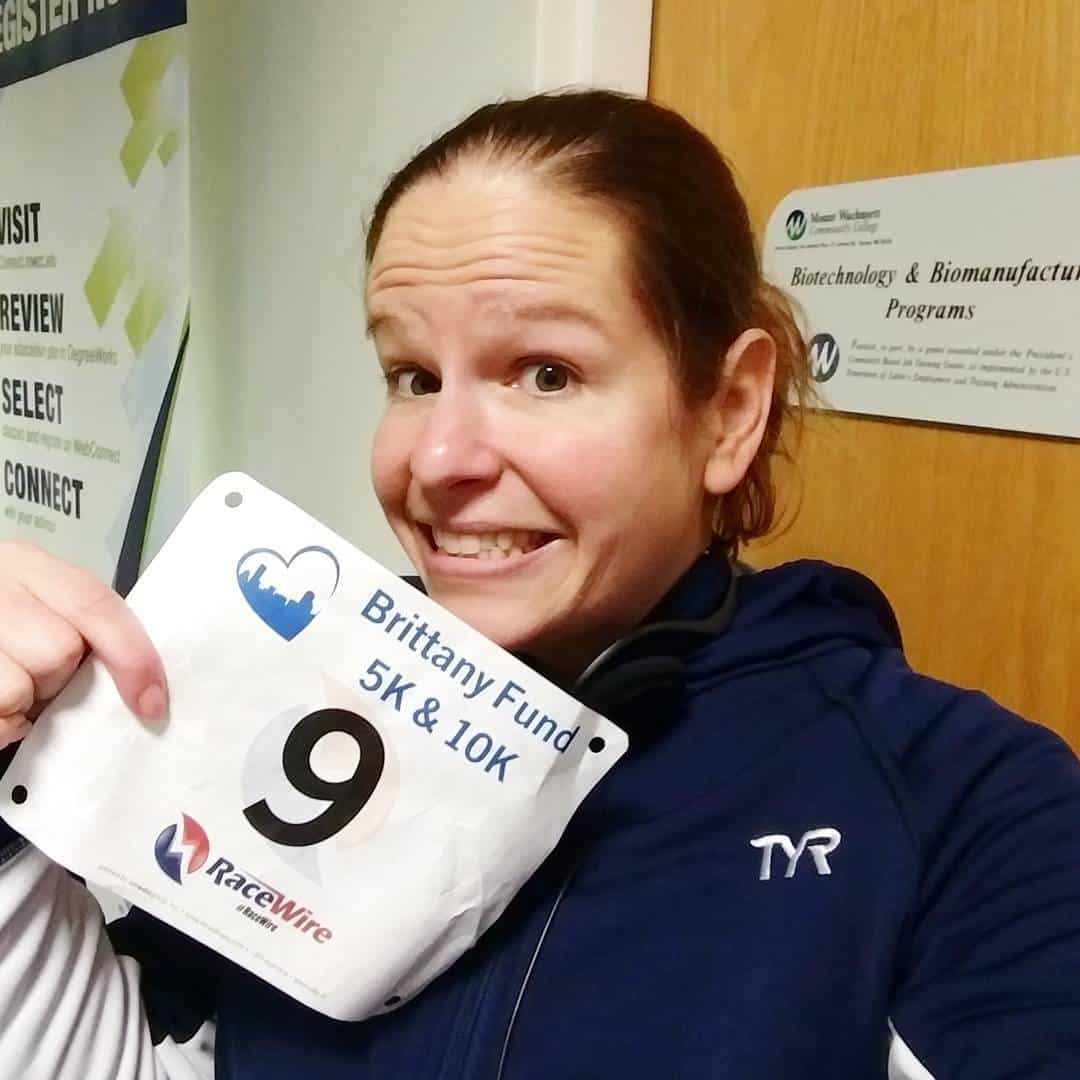 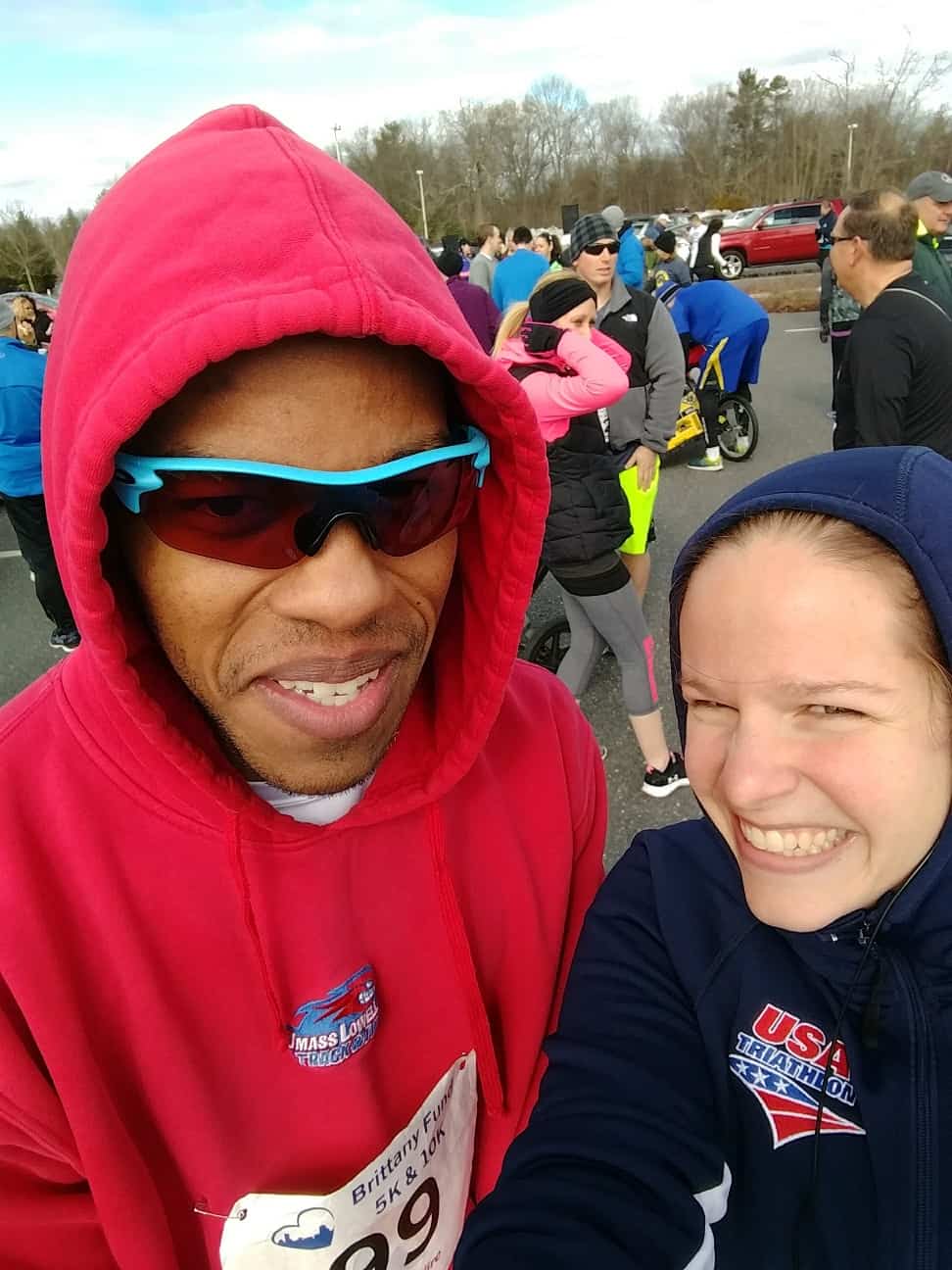 This event had a dual 5K and 10K, as well as a 1 mile walk.  I expected check in to be a little crazy because of the different distances plus on-site registration, but everything was very well-organized.  Plenty of on-site parking that was right next to the start/finish, quick and smooth check in, and lucky race numbers for us (me – 9, Terry – 99).

And there were pre-race donuts.  DONUTS!!  I love it.  Terry definitely took advantage of that. 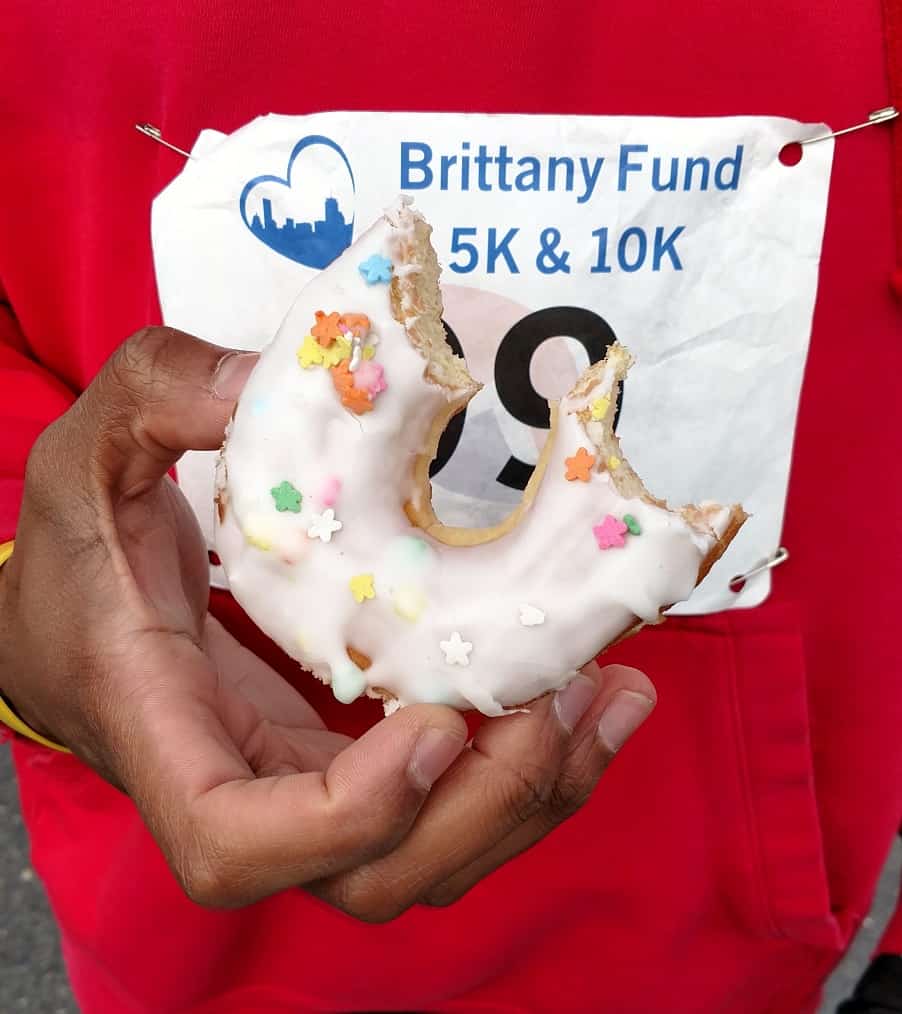 There was also a building that was open with real restrooms (no porta potties, woohoo!).  Plus the building was heated so you didn’t have to wait outside in the cold before the start.  {It was about 40 degrees and windy so it felt cold – I wish we could have had that heat wave hit a day earlier.}

The race start was smooth and the course was nice.  It was relatively flat, there wasn’t excessive car traffic, and there were only a few small hills throughout.  I ran and focused on my pacing.  Terry “ran” next to me pushing Dev in the jogging stroller.  And by “ran” I mean walked because apparently he can walk as fast as I run, haha.  {I’ll blame it on the fact that he’s tall and has long legs.} 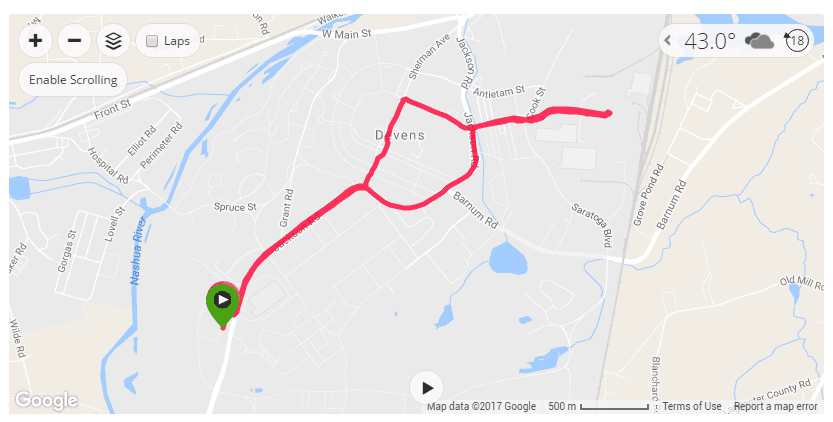 Of course, I have to talk about the inevitable.  The course was longer than a 5K.  Not a few tenths of a mile, but a solid mile and a half longer for a total course distance of around 4.5 miles. 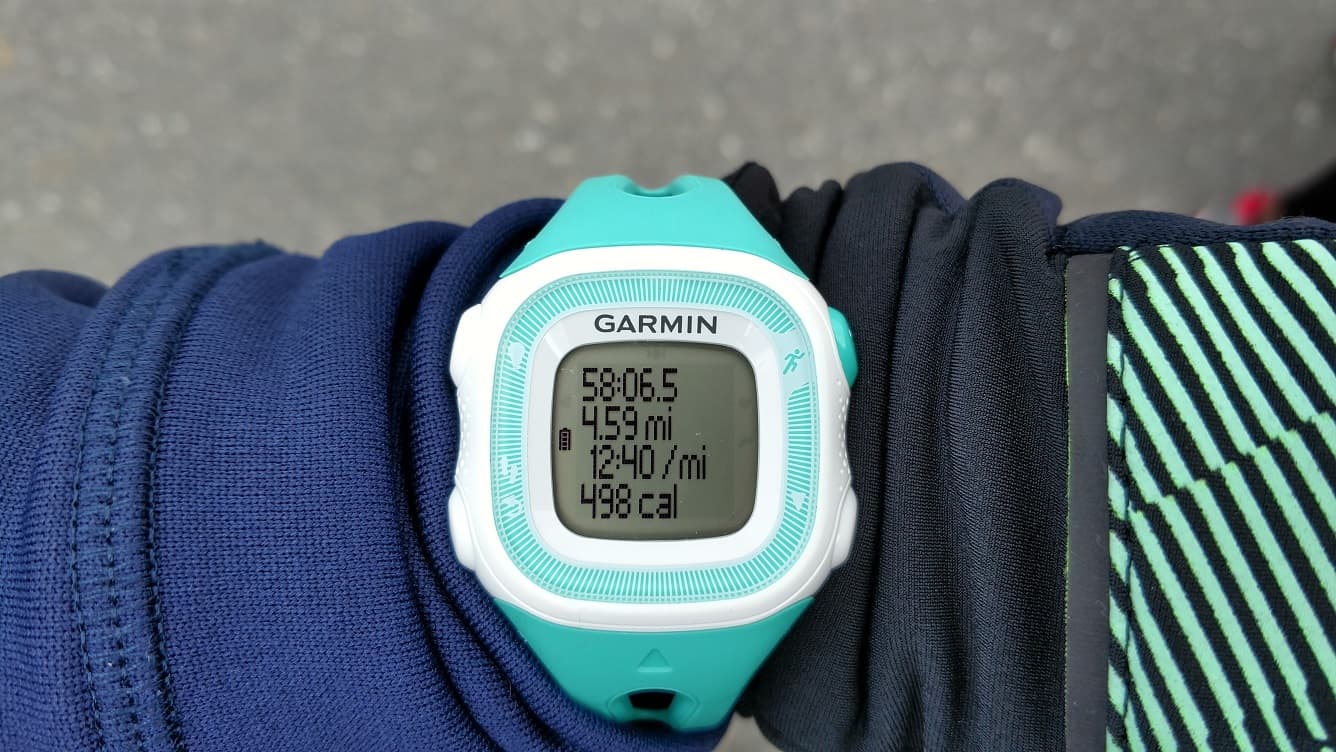 You can see my hilarious pacing when I realized we weren’t finishing around 3.1.  Mentally, my brain killed me there.  I had pretty nice consistent pacing (for me at least!) up until the 3.1 spot when I started run/walking.  I wish I had been able to control the extra distance the same way.  That darn brain with its negative self talk!

BUT if you ever end up in the same situation at a race, I’d encourage you to think about the big picture and show a little empathy to the race organizers.  It’s highly unlikely that the course was measured this way.  Though I’m not 100% sure, I’m fairly confident that there was probably a place where a volunteer was supposed to direct runners, and either no one was in that spot, or if there was someone there, they accidentally gave the wrong instructions.

People are human and mistakes happen.  The Brittany Fund 5K was a charity race to raise money for an incredibly important cause.  Being gracious and understanding in these situations is a lesson that is important for all of us in this community.

After the finish line, I was happy that I had the extra mileage because holy moly – what a post-race food spread!!  There were two different kinds of catered sandwiches, bagels, bananas, orange juice, chocolate chip cookies…AND some of the best coffee cake I’ve ever had.  Fo’ real, this stuff was amazing. 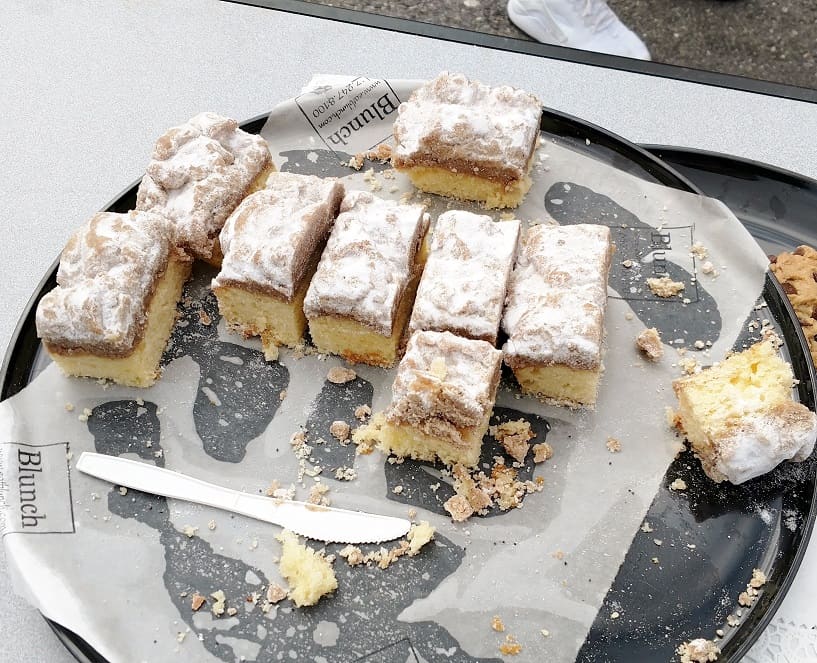 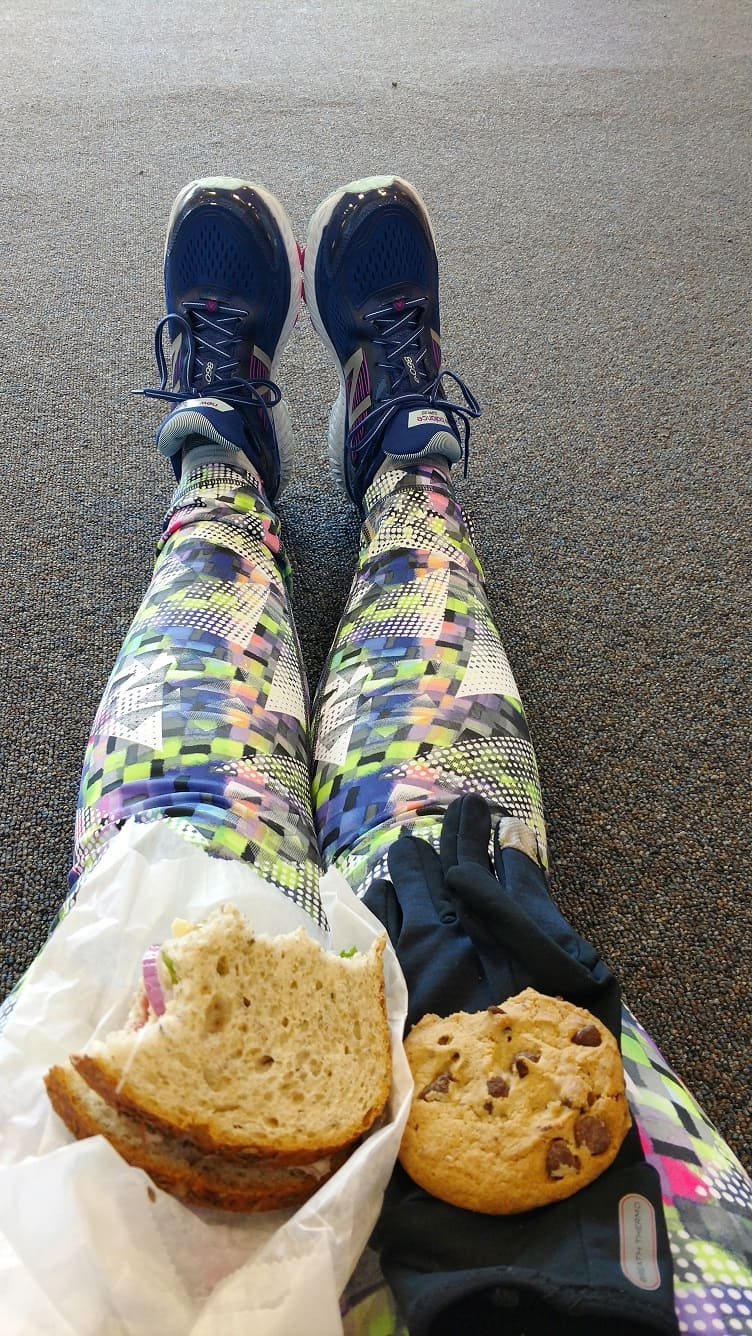 I’d definitely do this race again next year (I’m pretty sure everyone will be well instructed on the correct route to do the actual 3.1 miles in 2018 😉 ).  And if you feel drawn to the Brittany Fund’s mission and want to donate to them, you can do so here.

Share with me:  Have you ever done a race with a course that was shorter or longer than expected?  What’s your favorite post-race treat to enjoy after a race?