A turmeric fruit smoothie made with Dole’s Fruit & Veggie Blends Orange Medley is the best way to kick off New Year’s Day!

Disclosure:  This post is sponsored by Dole Packaged Foods.  As always, all opinions are my own.

The countdown is on…only a few more days until the New Year!  Like I mentioned in my last post, I’m looking forward to starting the New Year with a run, followed by a tasty brunch while my family and I tune in to the Rose Parade.

While I can’t wait to dig into my pineapple-topped french toast, I know some of ya’ll might be looking for a little lighter way to start the morning.  Whether you’re simply looking for a lower calorie breakfast, or you’re worried that a bit too many New Year’s Eve festivities will leave you feeling less-than-hungry the next morning – I’ve got a perfect option for you. 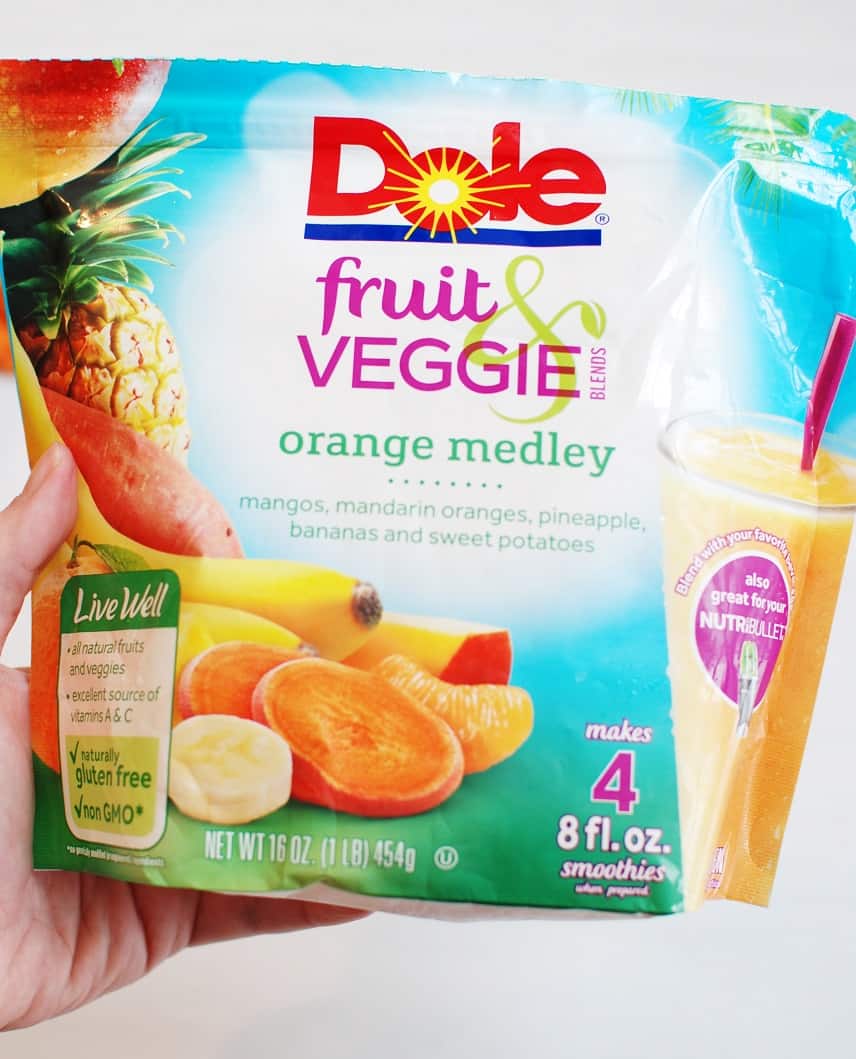 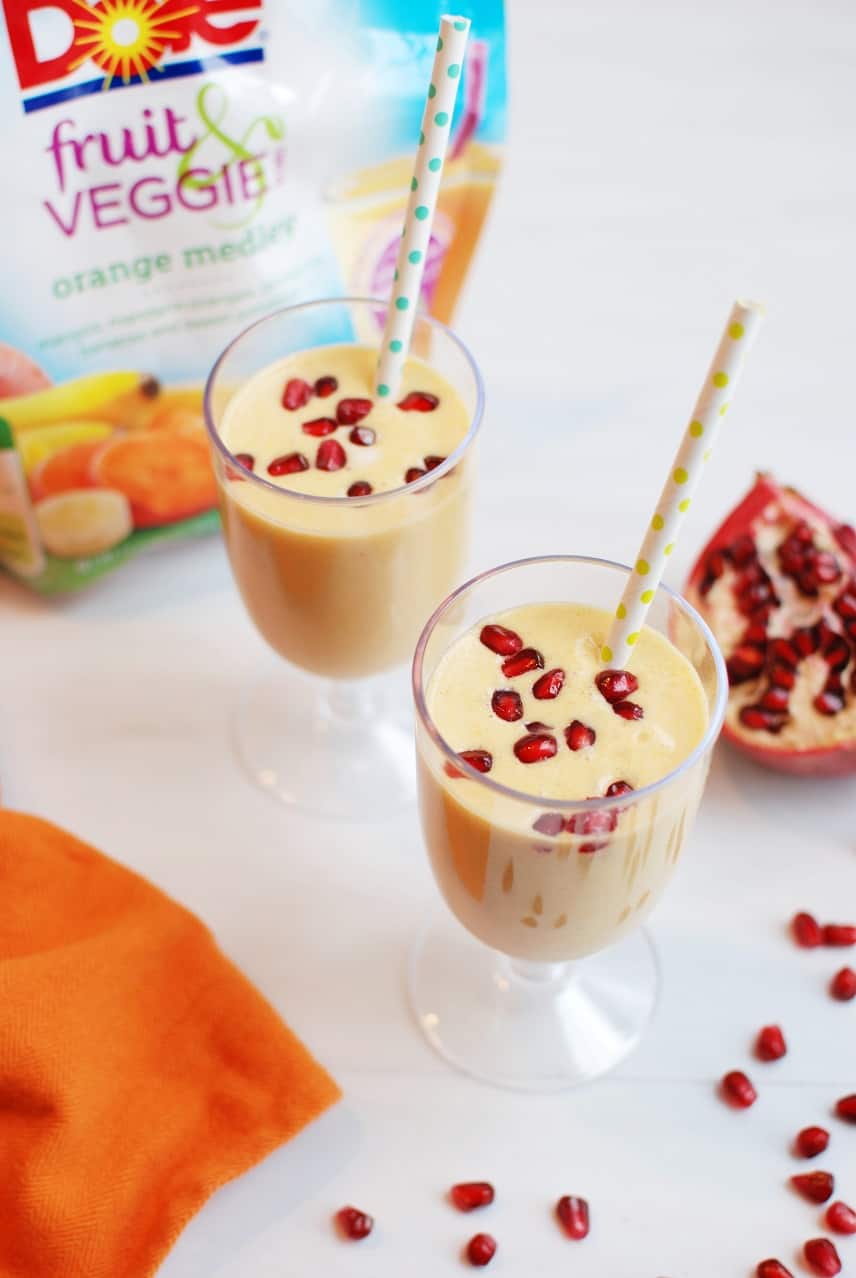 Clocking in at just under 250 calories, this is a light and refreshing way to start your morning.  Tropical flavors shine bright in this drink, from both the creamy coconut milk and the delicious fruits and vegetables in the frozen blend.

That’s right, not only does the frozen orange medley contain fruits like mango, mandarin orange, pineapple, and banana – but it also contains sweet potato for a creative way to boost your veggie intake.

Any why the turmeric?

Let’s cut through the hype – it’s probably not the magical ingredient that the media sometimes portrays.  But there is research that shows possible anti-inflammatory effects and benefits for athletic recovery.   And since turmeric may aid the liver in certain detoxification processes, theoretically it might be a good option after those New Year’s Eve cocktails. 😉  {Just postulating, I haven’t seen any studies on that yet!}

Plus, I’ve garnished this turmeric fruit smoothie with pomegranate, since I love incorporating lucky foods to ring in the New Year! 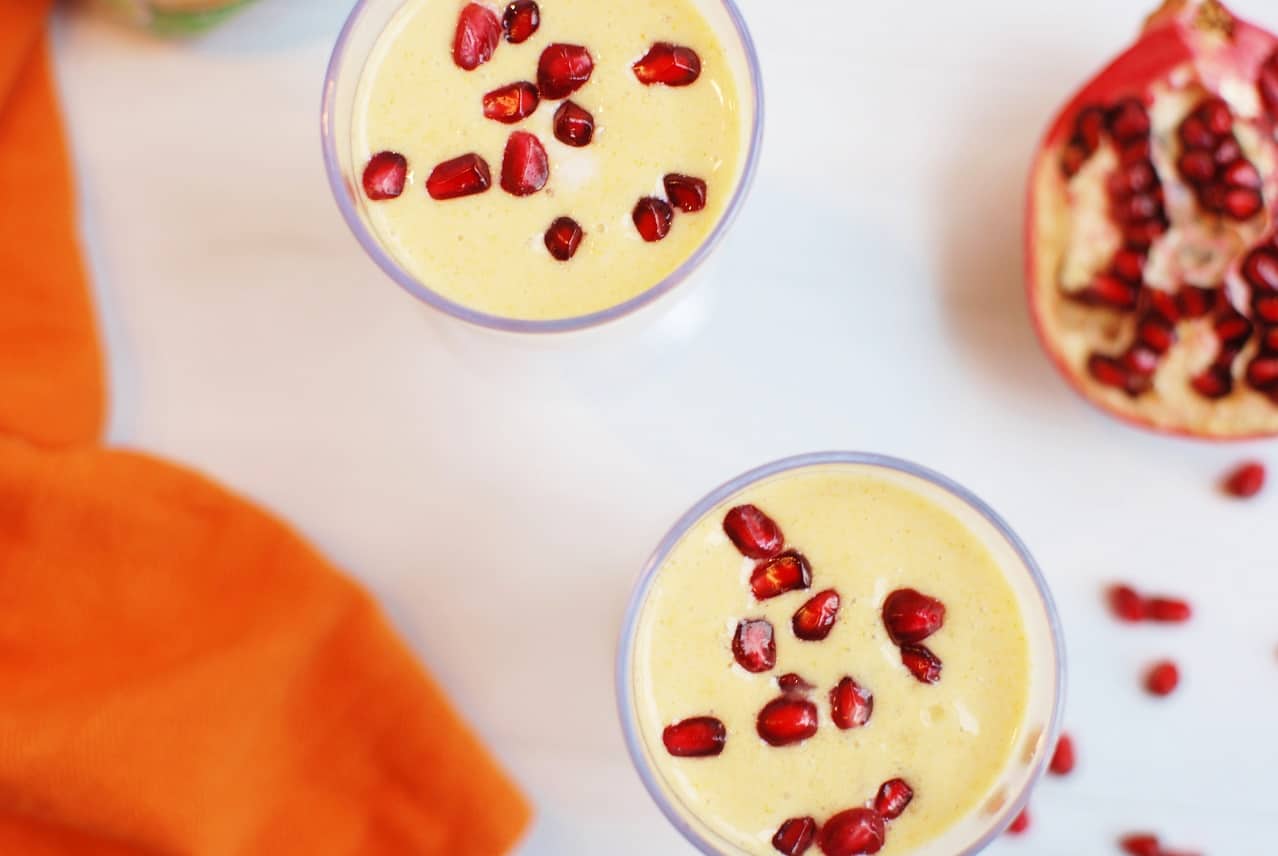 You’re probably familiar with some of these traditions, like eating black eyed peas, greens, and pork – but pomegranate is also known as a symbol for abundance and prosperity (thanks to their numerous seeds).  In some countries, pomegranates are smashed on the ground outside the house on New Year’s. The more seeds that pop out, the more prosperity and luck you’re supposed to have.

Pomegranate also symbolizes a fresh start, stemming from Greek mythology.  The tale is a little dark, but fascinating:  Hades, the Greek god of the underworld, fell in love with Persephone, the daughter of the goddess of harvest.  Knowing her mother would not approve, Hades abducted her to the Underworld.  Because she had eaten pomegranate seeds in the underworld, she lived there every winter, but was allowed to return to earth each Spring.

While it’s a bit of a dark legend, it speaks to the circle of life and our harvest season.  Seeds spending the winter months underground and blooming in the spring.  The abundance that nature offers us.

The whole intertwined connections between ourselves and the earth and our food – it’s just humbling to think about.

It’s actually one of the reasons I’m really excited to see Dole’s 2018 Rose Parade float, which has been designed to speak to the concept of the “circle of life.”  The “Sharing Nature’s Bounty” theme will highlight a grand display of the countries and cultures where Dole sources their produce; a mixture of creatures, water, and flora that highlights the careful balance and beauty of nature.  I can’t wait to see it!

The float’s display also speaks to Dole’s passion for improving the environment and sustainable agriculture, as well as their partnership with Feeding America to battle food insecurity.

You’ll definitely want to break out the blender, sip on your turmeric fruit smoothie, and join me to scope out Dole’s float in the Rose Parade. 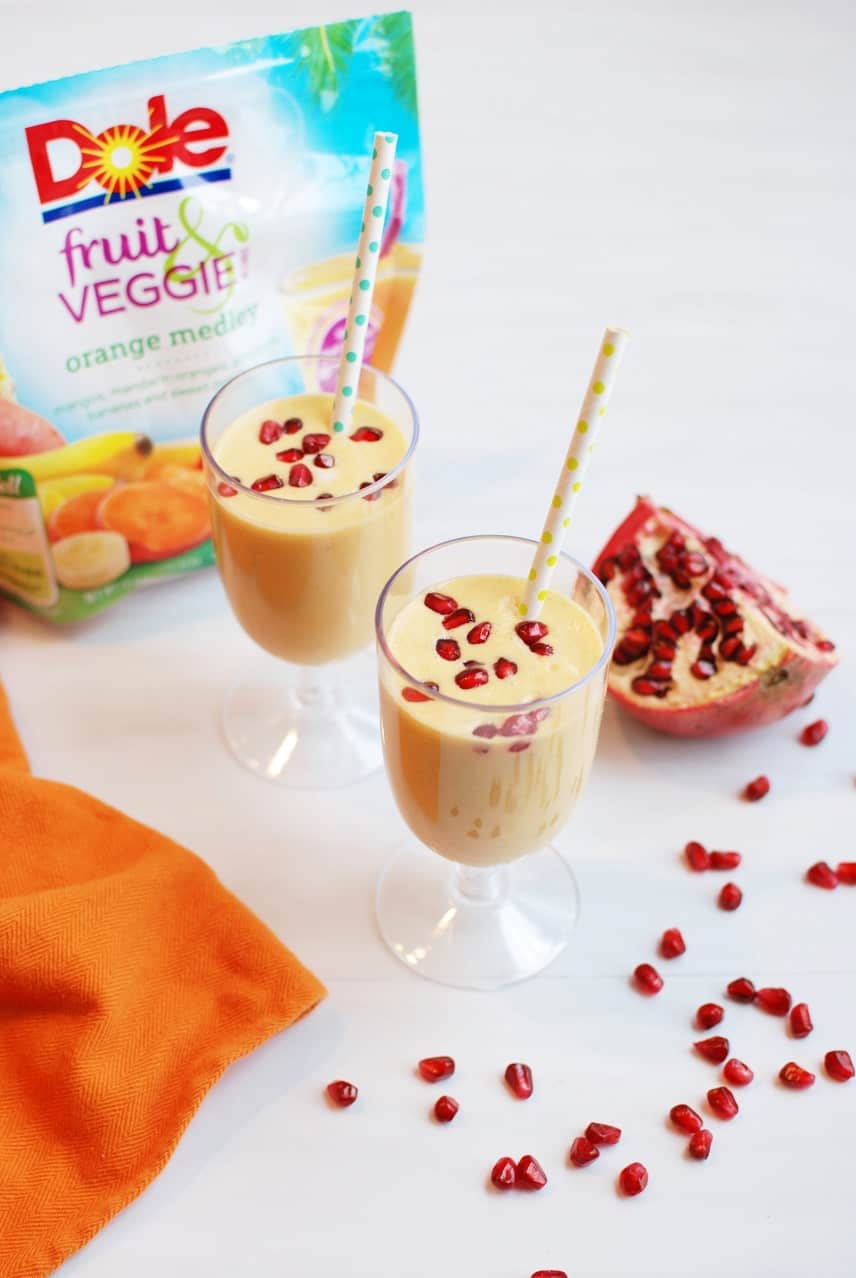 Tune in to Facebook during the parade for a live recipe demo!

I shared this in my last post, but as a reminder, I’ll be going live from my Facbook page on Monday, January 1st at 11:00AM EST/8:00AM PST!  You’ll be able to see just how easy it is to make this turmeric smoothie and pineapple French toast!  It’s the perfect opportunity to get the Rose Parade playing on the big screen, and cook alongside me on your phone or laptop.

Go grab your Dole orange medley blend, coconut milk, and turmeric – and I’ll “see” you on the first! 🙂

PS – if this little guy loved the smoothie this much, I think it’s safe to say you will too! 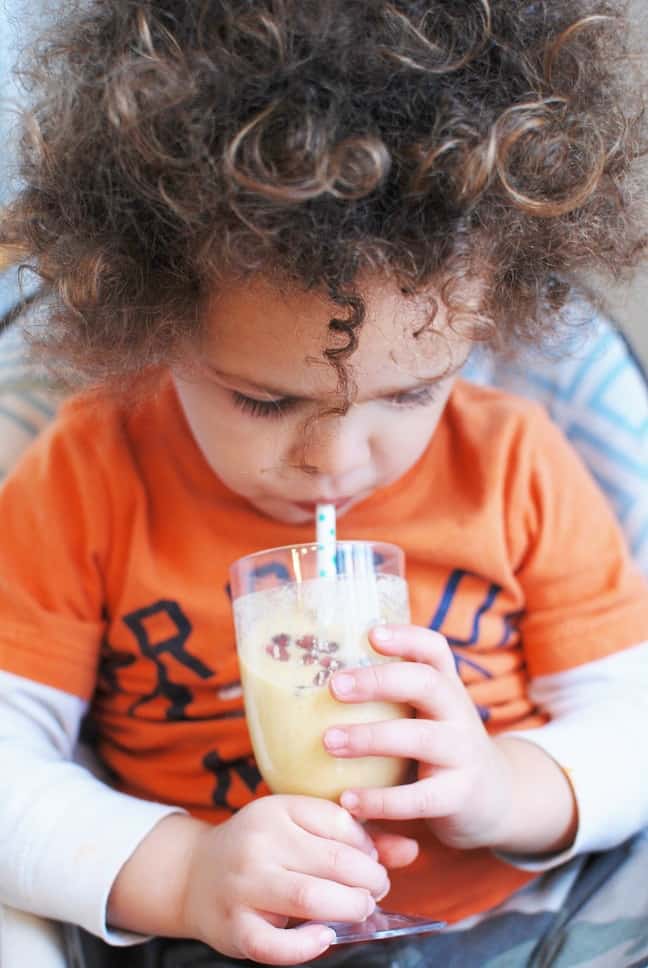 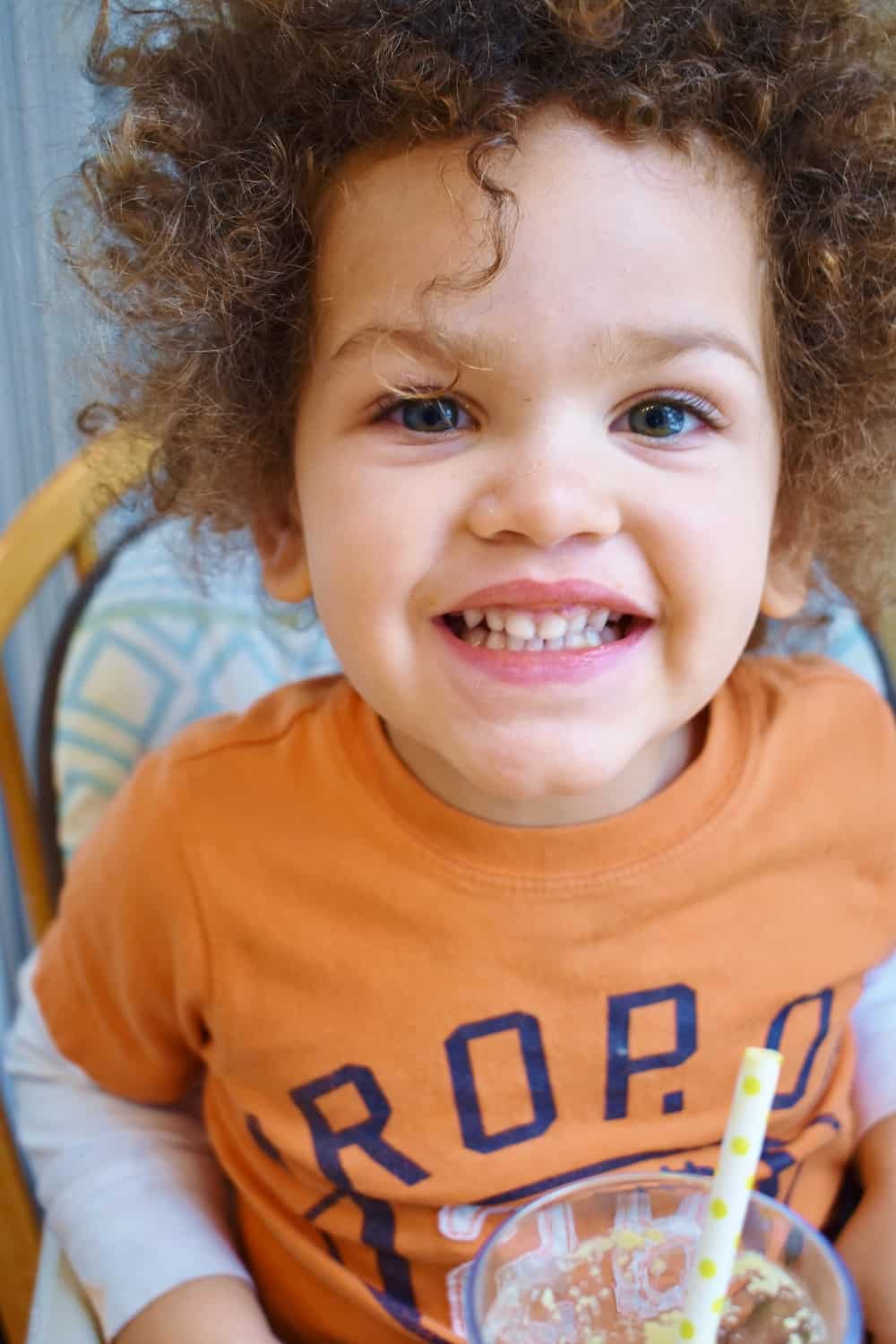 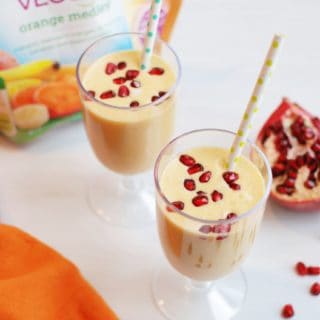 Calories: 240kcal
Tried this recipe?Let us know how it was!

Share with me:  Have you ever tried a turmeric fruit smoothie?  What lucky foods do you eat on New Year’s Day?  Are you excited to see Dole’s float in the Rose Parade?